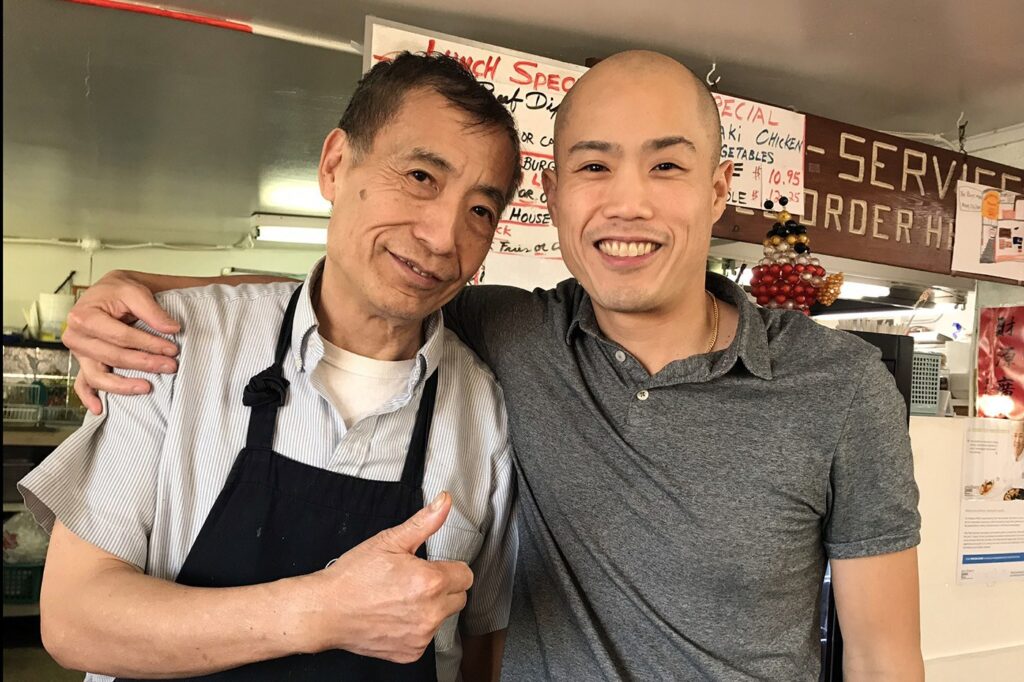 it’s almost impossible to visit the Northern Café and Grill by chance. To get there, you first need to find yourself in an industrial part of Vancouver near the mills and canning plants that line the Fraser River. Then you would have to cross over some railway tracks onto a potholed street and somehow feel inclined to walk through the barbed wire gate of Northern Building Supply Ltd., a lumber yard with a tin roof and hand-painted sign. There, past stacks of freshly cut cedar, you’ll find another handmade sign: “Northern Café Upstairs.”

The greeting you will receive is as warm as the approach is foreboding. This humble canteen has been here since 1949, and for the past 12 years it has been run with cheerful grit by Jimmy Mah and his wife Connie. The ceilings are low and the floors are crooked, but Connie makes the wontons fresh every day and Jimmy hand chops sirloin for the burgers.

The sexegenarian couple are joined in the kitchen by their son, Raymond, who worked as a chef at upscale Vancouver restaurants before his dad convinced him to join the business earlier this year. It’s a real family affair, and it often seems like customers are part of the clan, too.

“Thanks Josh!” says Raymond to a man as he settles his bill. “See you tomorrow?”

“It’s like that TV show Cheers,” Raymond says after Josh leaves. “You know, where everyone knows your name.”

It wasn’t always this way. When Jimmy first visited the restaurant in 2008, it was “disgusting,” he says. “Dirty. Just an old diner.” But it was for sale and Jimmy was restless. He and Connie had recently retired and running the restaurant seemed like it would be a worthwhile diversion. “I knew I could make it work,” he says.

It wasn’t too much of a stretch to imagine why. Jimmy had spent nearly his entire life as a short-order cook. Born in Hong Kong, he grew up in Sham Shui Po before leaving in 1965,

at the age of 14, to join his father in Canada. His dad was running a Chinese restaurant in Shellbrook, a small town on the plains of southwestern Saskatchewan. It couldn’t have been more different to Kowloon. “There were only about 500 people living there,” says Jimmy. The streets were wide, the buildings low and, except for the grain elevator that towered over the end of Main Street, there was nothing between him and the fields that stretched endlessly into the horizon.

Jimmy’s older brother was itching to go back to Hong Kong. But Jimmy took a liking to restaurant life. His parents taught him kitchen skills and soon enough he launched off on his own, moving to Edmonton, which was where he met Connie. Raymond was born soon after, and the family moved to Vancouver in 1984. “We kept heading west. Just like cowboys,” laughs Jimmy.

Jimmy and Connie ran a succession of restaurants around the city, and you may think that’s why Raymond followed in their footsteps. But he says that when he was a kid he wanted to become a cop, not a cook. That changed when he was a young man considering what to do with his life. He thought back to the dinners his grandmother hosted every Sunday. “She had 18 relatives come over to her 600-square-foot condo,” he says. “I began to realise that food is such a big part of people’s lives.”

Raymond went to culinary school and began an 18-year career in cooking, and eventually became executive chef at a high-end casino restaurant. He says it took some time to be convinced to join his parents in the makeshift kitchen of the Northern Café. “My last job was well compensated,” he says. “But I like being my own boss.” The hours are good, too: the Northern Café opens at 7am and closes at 3pm, which gives Raymond more time to spend with his two sons. He rolls up his sleeves to reveal a tattoo of each kid on his forearms.

By then, business was booming at the Northern Café. It wasn’t always that way. When Jimmy first bought the restaurant, “there were no customers except yard workers,” he recalls. But word soon spread on social media about the good food he and his wife were making. It helped that the atmosphere was exceptional: a lived-in place with checkered floors and red booths, the total opposite of the polished glass-and-concrete aesthetic that dominates Vancouver.

Now there are customers from around the world. Jimmy asks them to write him a message, which he sticks on the wall, highlighting the far-flung places from which they have travelled. There are notes written by people from England, the Philippines, Germany, Mongolia, and Korea. “We didn’t have any plans on our first day in town, but we were lucky enough to stumble upon this hidden gem,” wrote a visitor from Hong Kong who praised the hamburger and hashbrowns. “The owner is a secret master in the kitchen.”

“Whenever somebody new comes in, I ask them, ‘How did you find us? We’re in a lumber yard,” says Raymond. Often they’ve been referred by a friend, or they’ve stumbled across the restaurant’s listing on Google Maps or Yelp, where it enjoys almost universal praise. And yet, even with all the visitors, he says about 75 percent of customers are regulars. “We’ll see a new face – and eventually they’re start coming by every week.” 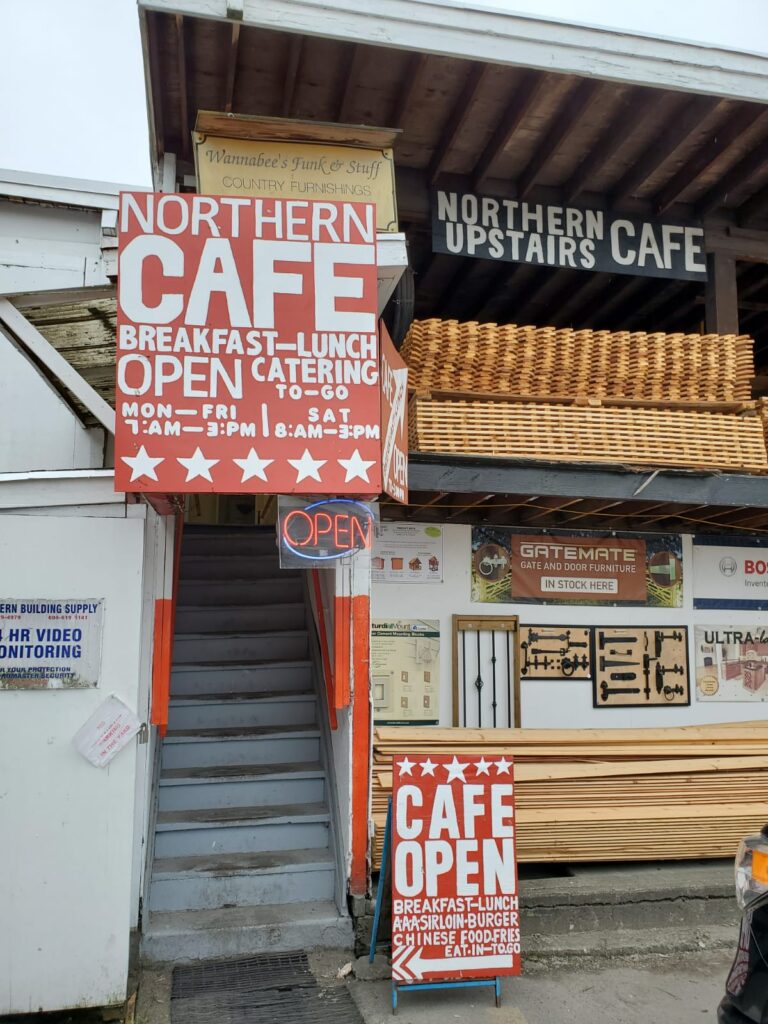 They come for a distinctly Vancouver mix of dishes. There are North American diner staples—burgers, fries, club sandwiches—but also noodle soups, chow mein and char siu. This particular combination was once quite common around the city, after Hong Kong immigrants took over traditional family-run diners, adding Chinese flavours to their menus of comfort food classics. They’re Vancouver’s answer to cha chaan teng, but as the city’s economy has boomed and property values have skyrocketed, these throwback restaurants have become less and less common.

The Northern Café is one of the few that remain, something that isn’t lost on Raymond. For all his culinary school training, he doesn’t want to mess with the menu. “What my parents have been doing is working,” he says. “Besides, I’ll always be daddy’s little boy.”

He thinks he may eventually make a few cosmetic changes when Jimmy and Connie retire for the second time. But he wouldn’t dare replace the red booths, and there’s no question of levelling the floor. After all, there’s a reason so many people make their way to this odd little restaurant in a lumber yard: it’s to eat somewhere that doesn’t feel like anywhere else.

The Northern Café and Grill is located at 1640 East Kent Avenue South, Vancouver.